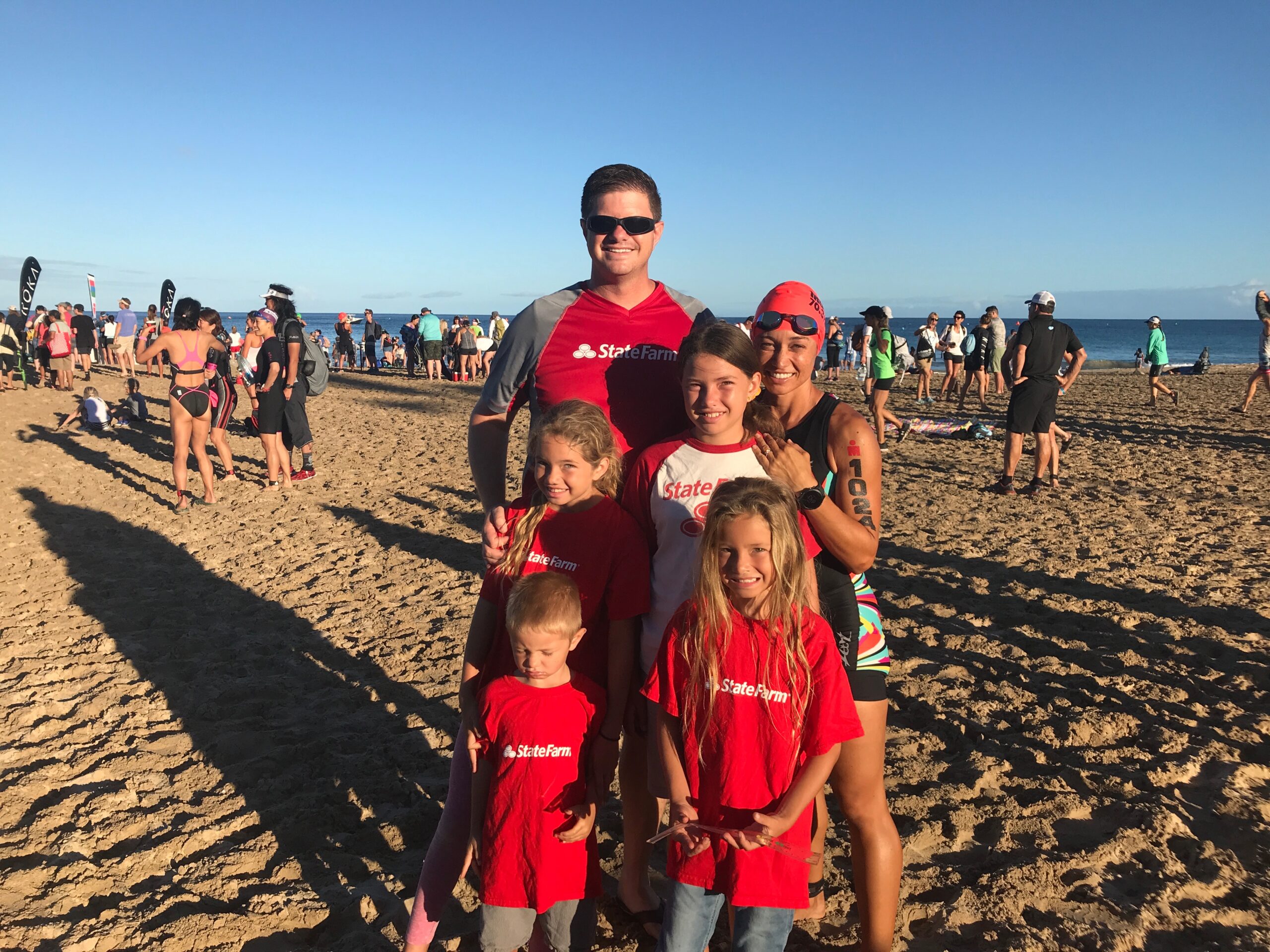 “There is a joy in setting your mind on something and working hard to accomplish that goal!” exclaims Mele DeMille, Ironman World Championship finisher and Mom of four. And that joy lit up the faces of her oldest children as they competed in the Bike Works Virtual Duathlon earlier this year.

On the last weekend in August, 12 year-old Naomi, 10 year-old Gianna, and 8 year-old Clara DeMille ran 1 mile, biked 12 miles, and ran 3 miles off the bike in their first duathlon.

“The girls had never tackled a challenge like that before. It was so amazing for them to take that on and complete it!” says Mele of an experience that could very well be a stillframe taken from the DeMille’s daily life.

This family of six doesn’t need a virtual race to get them outside and keep them moving, but they aren’t exactly absconding from the opportunity to do a du either. And you can probably blame Mom for that!

Mele, whose Dad is originally from Hawai’i, grew up on the move. Her Father was in the military, and as a result, Mele grew up travelling often. And swimming!

“You could say I was born into swimming,” she explains of a childhood spent swimming year-round. “But my parents signed us kids up for other sports too.” Among those, she lists basketball, soccer, and running. “Sports were a big part of my life.”

Then Mele met Matthew DeMille, who she married in 2004. By 2008, Mele and Matt were the proud parents of a baby girl… and then another. By the time Dallin, the youngest and only boy, arrived in 2016, Mele had her hands full with 4 kids under 10 years-old. She kept active, but didn’t consider being competitive.

That is, until Lydia Blackburn suggested that they do Honu in 2017, referring to the 70.3 Hawaii triathlon, which is typically held the last weekend in May. Coaxed by her training buddy, dear friend, and fellow Mom, Mele took the bait.

For Mele, competing in the 70.3 was just the beginning. Shortly after finishing the 1.2-mile swim, 56-mile bike ride, and 13.1-mile run for a third time in 2019, she realized that she had qualified in her age group as a Hawai’i resident for the 2019 Ironman World Championships. With only four months to jump from 70.3 miles to 140.6 miles, Mele had all hands on deck for her training.

“In a way, our whole family trained for Ironman! And it gave me the opportunity to show my kids how to plan and make time for everything,” says Mele of the support her family offered. Her youngest, Dalan, even got to “train” with Mom, as she pushed him in the stroller on some of her runs.

By the time race day rolled around, all four DeMille children had witnessed all the steps that lead up to such a monumental event. “That went such a long way in prompting them to set their own goals, even if it was run to a mile or two!” Mele elaborates, noting that small goals lead to big goals.

More importantly, all those daily steps were communicating a deeper message: Fitness is a lifestyle and healthy activities are something everyone can integrate into their lives. When children watch the adults in their life get outside, commit to being healthy, and even try different sports, they see a bigger picture.

“They realize they can do any adventure they dream up!” adds Mele.

In between 140.6-mile efforts and running a few miles as a family, the DeMilles have been working on daily goals that equate to an active lifestyle. So when the Bike Works Virtual Duathlon was announced, Mele knew it would work into her family’s existing plan.

“I hoped my oldest two would want to do the virtual race. And Clara was watching her older sisters and told me she wanted to do it too. She was excited, so I said yes!” says Mele of her 8 year-olds determination. As race day approached, Naomi and Gianna suggested to their Mom that they do the Bike Works Virtual Du as a relay. Little Clara had other ideas.

“I thought she’d do a part of the du, but Clara ended up motivating her older sisters to complete the entire race.” So on the 29th of August, the DeMille’s headed to the Mauna Lani Resort to do the longest race they had ever run… and biked and run.

As support crew, Dad and 4 year-old Dallin set up aid stations on the course and provided water, while keeping the event safe and fun, which is a priority to the DeMille’s. “For kids, you have to put in the effort to make it a fun family event,” Mele points out.

With the 12-mile bike ride behind them and a 3 mile run left, the sun was nearly setting and Mele wondered how long her youngest daughter would hang in there. “But Clara had her mind set on it, and she went after it!”

For Mele, seeing her children set a goal and work hard to attain it was gratifying, but witnessing the joy they experienced when they realized that anything can be achieved when you set your mind on it was the best part. As far as the next challenge, the DeMille kids have already expressed an interest in going off-road.

“They really want to do the Waipio to Waimanu hike!” Mele affirms.

So you’re a parent who wants to do an off-road duathlon. Or maybe you just want to pull your kids away from their phone and get the family outside. Perhaps you’d like both for your family, but that seems like a tall order.

“There’s always a way!” Mele assures other parents. “If you have young kids and you want to fit fitness in, push your little guy in a stroller. Include your kids in your workout if you can.”

Mele also suggests analyzing your day and identifying down-time that would be ideal for training. For some that may be 9:30 at night after the kids go to bed. For Mele, that meant getting on the trainer at 3:30 in the morning.

Finding a friend who is a fitness-enthusiast and tag teaming with them is also beneficial. The DeMille’s often buddy up with endurance athletes Lydia and Ben Blackburn, and their children, to ensure that the whole family gets outside and parents get their workouts in.

“Having the Blackburns to do this active life with gives my family a community to be part of,” says Mele of how she and Lydia take their children to the beach and alternate watching all the kids while the other one swims.

Being part of an active community also offers the added benefit of nudging parents toward their goals because of, not despite, their kids. Mele experienced this firsthand when she and Matt moved to Hawai’i in 2014.

Every year, on the second Saturday in October, Mele joined the throngs of other spectators in cheering for the rockstars of triathlon as they competed in Ironman. In her heart, she wanted to be racing too, not observing from the sidelines. In her mind, however, it wasn’t the right time. Until Lydia encouraged her to consider participating in Hawaii’s 70.3-mile Honu triathlon.

“Never put a goal on the back burner because of kids. I know, because I did that. I needed a friend to get me to consider making it a priority,” advises Mele, who realized that if she continued believing that motherhood was why she was putting off her goals, she was actually conveying to her kids how to neglect their own goals.

“Set that example and raise your kids knowing that we CAN accomplish those goals!” Mele says enthusiastically, adding that the determination to reach a goal translates to many other aspects of life, including overcoming emotional challenges in adulthood.

According to Youth Sports Psychology, children who meet and exceed their goals while setting new ones develop the foundations of confidence. And regular exercise has been shown to be incredibly effective in boosting your mood, relieving stress, reducing anxiety, and minimizing depression, no matter what your ability or age. Essentially, being physically fit improves your mental health.

“And I’m a believer that physical movement moves kids to open up,” says Mele of the link between movement and communication, which is apparent in everything from running to volleyball. “You connect with someone when you’re progressing in the same direction as them. Moving together offers opportunities for our kids to open up and share how they are doing, which is SO important right now!”

Undoubtedly, sport creates an atmosphere where people are comfortable opening up to each other. And when it comes to communicating our thoughts and expressing our feelings these days, we could all use more opportunities to do so without judgement.